The warm side of the rainbow.
​It has been an incredibly busy year but I try to get out and about for walks in as much nature as I can find in the city to stock up the artist well that I draw on for my work. The beauty, colours, and rhythm of nature are the infusion for my abstract expressionistic paintings. This photo I just took today as I went for a walk in Wychwood Park here in Toronto. The summers may be hot, humid and unbearable at times but the warm long fall with all the vibrant warm colours make up for it. 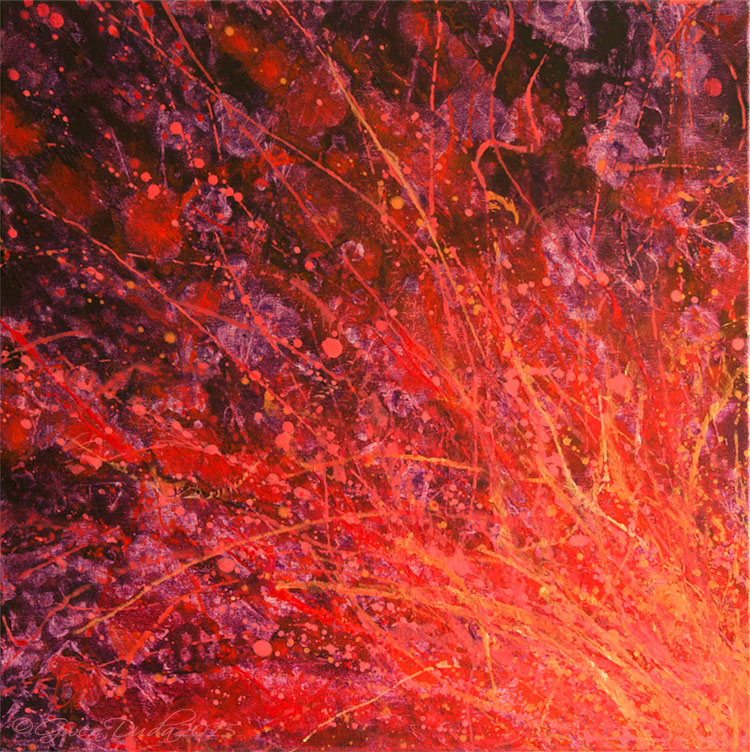 "She's Leaving" 16" x 16" acrylic on stretched canvas, Gwen Duda, © 2015
"Who’s this?" She asked, sleepily and a bit ill-tempered from being roused from her unabating need for sleep. "It's your daughter, Gwen", I said, encouragingly, hoping to get her to that place where she laughs and says "Oh Gwen!" Hello!", but not this time. She was confused, very confused. The nurse was there to help her, hold the phone, whispering encouragement too. But it was just no use. This was the first time ever that my mother, who has been dealing with Alzheimer's for the last ten years, had absolutely no clue who I was or even why she was talking on the phone.

I tried to help her remember. I called her by her English name, Lena, and then by her Ukrainian name, Vasylena, given to her at birth and called out at supper time by her mother to bring her in from playing with the kittens and lambs on the farm. I hoped it might find a foothold in the halls of memory in her mind. Then I heard clattering and scratching as she put the phone down and laid down to go back to sleep. I hung up and called the nursing station back, thanked the R.N. who had helped me, and mentioned that Mom's phone needed to be hung up properly. She said she was sorry and that Mom had indeed slipped further into the disease. She was very kind. I thanked her again, said goodbye, and hung up. I turned to look out the large living room windows at the quickly fading apricot light fusing with the darkening blue, the last remnants of the day. Dusk was setting fast. I was losing her.

There were no words only a feeling that I could not describe. I needed to do something. I needed to vent, mourn, honour the fact that one of the most amazing, quirky, kind, compassionate, creative and positive people I had ever known was leaving this plane of existence and the world would be much worse off because of it but it will never know it.

Now, I am not saying this because this beautiful woman is my mother. No. If she were my neighbor I would be hanging out at her place, helping her put in another incredibly bountiful garden or learning how to paint a house, mend clothes, make the BEST pastries, pies and food I have ever tasted, paint Easter eggs, sew a skirt, mend a fence, take in stray cats, mend bird's wings and all in the comfort of a perfectly kept house, garden and yard full of thriving and beautiful life. And she'd be giving me food all year long from that garden and would have been more than happy to teach me anything. She was truly, a domestic goddess and I was just too damned young and stupid to know it growing up. I know it now though, boy do I. As her star starts to sputter and dim, I know it, and I feel the loss of her.

I went into the studio. "Her star is going out" reverberated in my mind. Several hours passed as I hurled paint, pushed it, forced it which slowly gave way to a more deliberate and ginger placement of colour passages and lines - her energy. The next day more time passed as layers of colour were applied and left to dry. What started with a fury and force ended with gentleness and a relinquishment. It was fast approaching, her time to go and my time to let it. I felt the warmth of her loving being; fun, like a mischievous smiling-sweet little imp, heart of compassion and just a touch of fire. She was, after all, born in the year of the dragon, but luckily for me I never really ever felt a flame. She was my mother, who told me that she had prayed to God for a daughter and soon after conceived and I was born. I was a good kid, never got into much trouble and loved just being around her as she did her kitchen diva thing and I did my latest art project or school project at the kitchen table. Every now and then she'd take a peak at what I was doing and beam with pride.

This painting is for us, my mother and I, and for all of you who in your life have lost or are losing that most beloved someone for whom no replacement can ever be found. We must just feel it.

And so, until then, when the mist or curtain that obscures this world from that which is and will ever be is lifted, till then I will call to you, my dearest Mom. My heart and yours will always be tied. In a love and kindness, such, a tender, tender kindness that defies all suffering, all hardship, we will be held. Love eternal.

Till then, as your prepare to go, good-bye my shining sun, my northern star, my most beautiful mother. Goodbye.

I was part of a 3 artist show titled "Texturescapes and Golden Adornments at the Peter MacKendrick Gallery in Toronto, Ontario, Canada. The space was beautiful and opening night busy! The featured piece was titled, you guessed it, "Golden Adornments" 24" x 24" acrylic on textured canvas. The only thing missing was the frame that failed to show up in time for the show but the painting was a show favourite none the less! 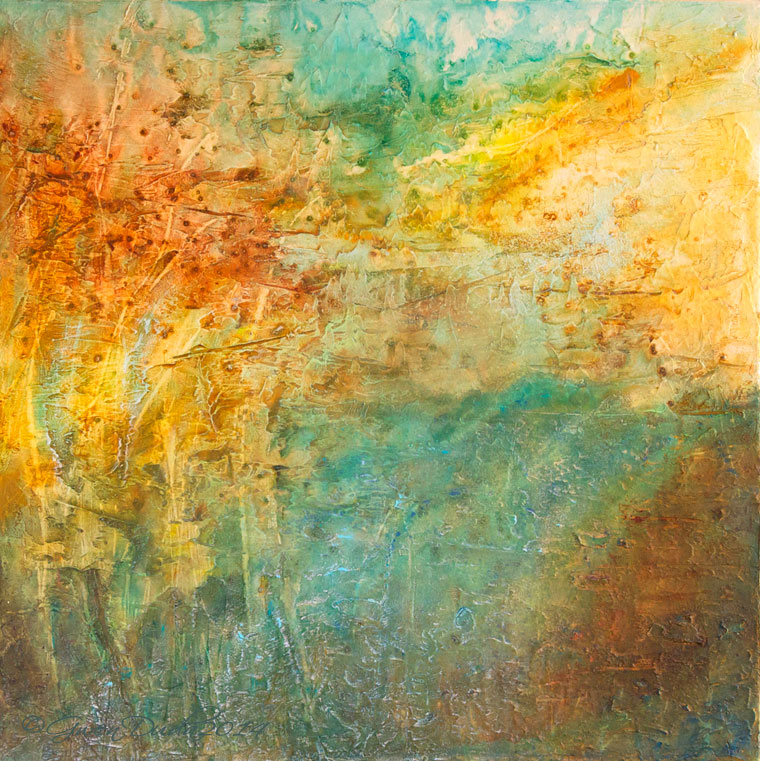 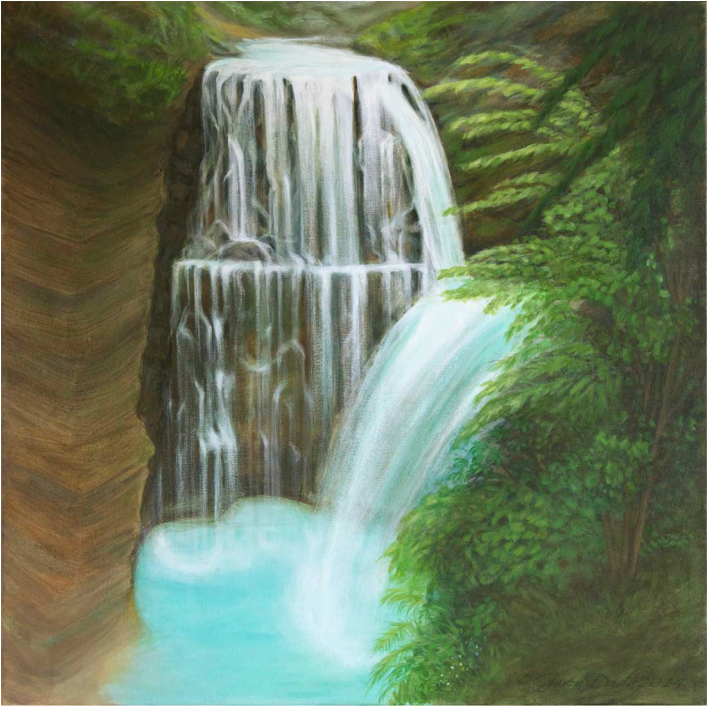 ﻿The Making of a Peaceful Place﻿

At one point in m life, after a LOT of turbulence I wanted a peaceful place to rest my tired feet, back and soul. I thought "I would love to just be by a peaceful waterfall like the ones I had seen on my hikes up in Banff National Park. And immediately I knew what I wanted to paint, NEEDED to paint. And so it started. It was soothing to have to spend so much time on this image as I WAS the waterfall as I created it. So I started this painting back in 2006 but little did I know that my life was going to get VERY hectic and I would soon be overwhelmed with family illness, moving and so on.

So now, as 2014 winds down I FINALLY got this little beaut out of storage and finished it! And I must say I am SO happy with it. It just beams like a placid soothing beacon in the night. Sometimes the best things are worth waiting for : )